Wings of WarWittmann's Tiger I in Villers Bocage
Back to: Military Vehicles Art 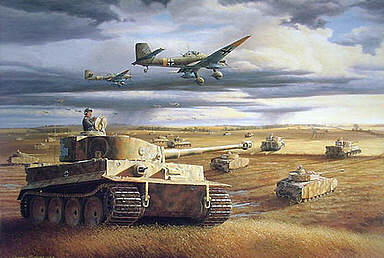 Wittmanns Tiger at Kursk © Barry Spicer
Price incl. VAT: 190 €
Ask a question about this product
Spicer, Barry
Description
The military art print 'Wittmann's Tiger 1 at Kursk' by Barry Spicer depicts Michael Wittmann in his Tiger 1 on the 12th July 1943, near an erstwhile obscure hamlet called Prokhorovka. On the eighth day of the Battle of Kusrk, Michael Wittmann in his Tiger 1 of the 13th schwere SS Panzer-Kompanie is about to take part in a clash of armour the magnitude and ferocity of which the world has never before witnessed. Overhead, Stuka formations led by Hans-Ulrich Rudel were already winging their way to soften up the Soviet positions. Artist Barry Spicer combined historical and technical detail with panoramic depth to illustrate the scale of the battle about to commence.