Wittmann's Tiger at Kursk
Back to: Military Vehicles Art

Wittmann's Tiger I in Villers Bocage 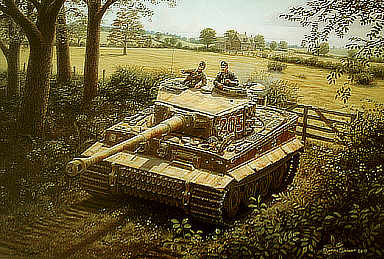 Wittmanns Tiger I in Villers Bocage © Barry Spicer
Description
The military art print 'Wittmann's Tiger I in Villers Bocage' by Barry Spicer. On the morning of June 13th, seven days after the allied D-Day landings at Normandy, a series of events occurred that would carve Michael Wittmann's name into the annals of tank combat. For here, just north of the the Norman village of Villers-Bocage, Tiger company commander Obersturmfuehrer Michael Wittman, already a legend from the Eastern Front, single-handedly took on a column of the British 7th Armour Division, and literally destroyed it, so forestalling General Montgomery's planned unhinging of the Wehrmacht's Caen defence.
Here, we see Wittman and Woll planning their lone charge on the unsuspecting British column crossing some 100m down the slope from their concealed position, as the driver readies the Tiger. Moments later, the Tiger careers out of the trees and onto the very road on which the 7th Armour was travelling, firing head on without stopping, hitting one tank after another as it raced down the line of the column. In maybe three minutes of violence and carnage, some 25 British tanks, half-tracks and assorted light skinned vehicles were destroyed and the immediate threat of the flanking attack neutralised.