Messerschmitt Me-262 of Jagdgeschwader 7 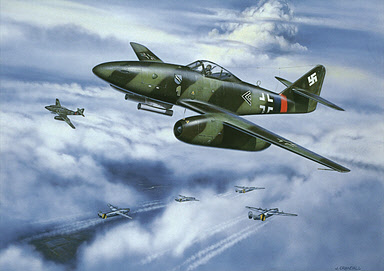 JG-7 Me-262 © Jerry Crandall
Description
The aviation art print 'JG 7 Me 262' by Jerry Crandall depits a colorful Messerschmitt Me 262 of Jagdgeschwader 7, flown by the group commander of III./JG 7 Major Rudolf Sinner. Due to the incredible speed of the Me 262, frontal attacks on bombers were not the normal tactic, but did happen. The scene is based on an incident in the days when the JG 7 experimented with WGR 21 cm rockets, which turned out to be unsuccessful and were discarded quickly. Major Rudolf Sinner flew a frontal assault on the B-24 bombers of the 448th Bomb Group and shot down a B-24 which collided with another bomber.
Limited Edition