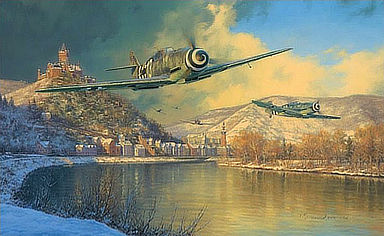 Where Storm Clouds Gather © Anthony Saunders
Description
With the aviation art print ‘Where Storm Clouds Gather’ Anthony Saunders again demonstrates his artistic talent to portray the Bf-109 of JG4, one of the many Luftwaffe units that took part in the German Ardennes offensive that began in December 1944. In the foreground is Hauptmann Ernst Laube, Gruppenkommandeur of IV./JG4, seen leading his men along that part of the Mosel river dominated by the seemingly unscathed Reichsburg Cochem Castle. They are returning to base after a hard-fought encounter in which, outnumbered by Allied fighters, they are relieved to have survived yet another day.
Continuously improved and upgraded more Bf109s were produced than any other military aircraft in history, with one exception, the Soviet’s Il-2 Sturmovik. The much-feared fighter was flown by the highest scoring Aces of all time – men such as top-scorer Erich Hartmann (credited with 352 aerial victories), Gerhard Barkhorn (301 victories), Günther Rall (275 victories) and the highest-scoring ace in North Africa, Hans-Joachim Marseille (158 victories).