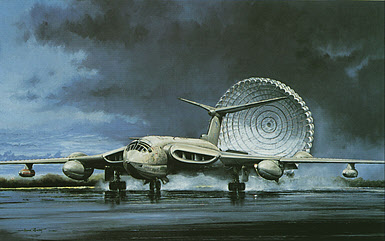 This aviation art print is a tribute to the mighty Handley Page Victor, the last V-bomber in Royal Air Force Service. After three decades of front-line Squadron service with the Royal Air Force, two wars, and over 40 years since their conception, the last of the V-bombers has retired. The Handley Page Victor played a significant role in the Falklands conflict of 1982 and in the Gulf War of 1991. The final flight by an RAF Victor was made in November 1993 when XH672 'Maid Marian' flew from its RAF Marham base destined for the RAF Museum at Cosford, thus drawing to a close the distinguished career of the Cold War big bomber.

During 2500 hours of Jaguar flying, Michael Rondot spent many hours plugged into Victor tankers en-route to pleasant destinations such as Bermuda and the USA, and unpleasant ones such as downtown Kuwait and Iraq. He developed a respect and admiration for the Victor and its air­crews that can only come from being alone in a thunderstorm, short of fuel and navigation aids, with only a Victor between the pilot and an icy North Atlantic bath. Qnce again, he displays his unique talent as an aviation artist with a quite beautiful composition that is charged with the power and atmosphere so characteristic of his paintings. A magnificent background of thunderclouds and the hues of an evening sky form the setting for his superbly accurate portrayal of the last Victor, XH672, landing on a rain-soaked runway. The aircraft and its massive braking parachute are bathed in brilliant sunlight in this superb painting which pays tribute to an outstanding combat aircraft.

Only one edition will ever be published. Each print is signed, dated and numbered and embossed with the Collectair seal to guarantee the edition. Matching numbers will be reserved for collectors purchasing VICTOR FAREWELL and VULCAN FAREWELL. Michael Rondot has agreed to remarque 50 copies within the edition with an original pencil drawing on the print border to enhance the value of this truly significant Limited Edition to mark the last of the V-bombers.