Up Amongst Eagles - Limited Edition

Messerschmitt Bf109 pilots of 7./JG3 over the fairytale Neuschwanstein Castle 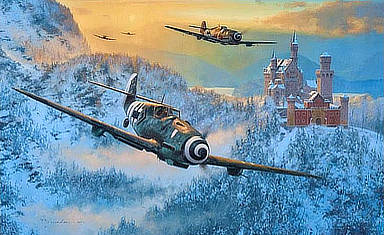 Up Amongst Eagles © Anthony Saunders
Price incl. VAT: 114 €
Ask a question about this product
Saunders, Anthony

When the prototype of Willy Messerschmitt's radical all-metal single-seat monoplane fighter first took to the air in May 1935 little did onlookers realise they were witnessing the birth of one of the world’s most iconic aircraft. Sporting sleek lines, a closed cockpit and retractable landing gear the Bf109 was soon wowing the crowds at the 1936 Berlin Olympics, an ominous prelude to its worth in battle after its introduction into service with Germany’s Condor Legion in the Spanish Civil War the following year. It was clear to friend and foe alike that this agile, well-armed little fighter was superior to anything else in the skies and by the outbreak of World War II the Bf109 formed the backbone of Hitler’s new Luftwaffe. With battle-hardened pilots well-prepared for success in Poland, the Low Countries and France, they were now ready to duel with RAF Fighter Command during the Battle of Britain.

Bf109s also served in the Balkans campaign, they flew against the Soviets on the bitter Eastern Front and fought in the searing heat of the North African desert before being pressed into service defending the Reich from the US Eighth Air Force’s massive daylight bomber formations. On every front over occupied Europe, Allied pilots would invariably encounter the Bf109 – one of the few aircraft to see front-line service throughout the war.