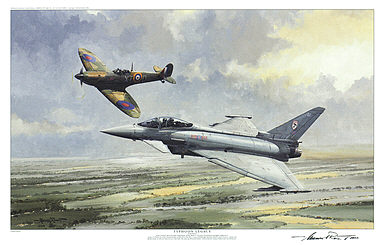 This specially commissioned print portrays two of the most remarkable fighters in the RAF inventory, both of which operate from the same base at Royal Air Force Coningsby Lincolnshire. Spitfire P7350 fought in the Battle of Britain and was shot down during October 1940 while serving with 603 Squadron. She was quickly repaired, and having survived World War II, still flies today with the Battle of Britain Memorial Flight. Eurofighter Typhoon ZJ911 is the first single seat F2 variant to enter service with 29 Squadron, representing the first of the new generation of fighter aircraft for the Royal Air Force and the replacement for the Jaguar and Tornado F3.

Giclée Canvas Masterworks
These beautiful artist-signed prints on canvas replicate the look and feel of the original painting with striking effect. Only a very few are issued with each edition, and because they are so rare, they are often fully subscribed soon after release.

Artist's Proofs
Artist's proofs (APs) are traditionally given greater value by collectors because they have additional signatures and may be difficult to obtain. Five Spitfire pilots, including two who flew Spitfires in the Battle of Britain, have individually signed the 50 APs in this edition.

Remarque Prints
Especially prized for their rarity value and personal touch, remarque prints have additional signatures and a detailed original pencil drawing added to the print border. Purchasers may specify individual squadron aircraft and badges to personalise their print.

The Signatures
FIVE distinguished Spitfire pilots have individually signed the 50 artist's proofs and 25 remarque prints in this edition: