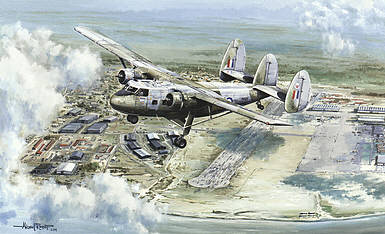 Royal Air Force Twin Pioneer in action over Seletar, Singapore. Kown affectionately by its crews as the "Twin Pin", the Scottish Aviation Twin Pioneer was an outstanding short take-off and landing tactical ransport aircraft. In RAF service, it was used mainly in the Far East, where its STOL qualities enabled it to operate into remote strips just a few hundred metres long, often in rough inhospitable terrain or jungle clearings well beyond the range of helicopters. RAF Twin Pioneers saw action in Aden, Kenya, Kuwait and finally Malaya and Borneo, where it was pressed into service as a bomber for a short time during intense fighting. Popular with its air and ground crews, Twin Pioneers were often flown by ex-fighter pilots, who enjoyed exploiting its slow-flying qualities on operational sorties in support of Special Forces.

In civilian guise, twenty countries operated the "Twin Pin" and several are still flying, the best known being the former ETPS example operated by Air Atlantique. The aircraft represented in Mike Rondot's remarkably detailed painting is XM961, which is now at the Museum of Flight, East Fortune.

The edition is limited to only 85 giclee prints on heavyweight fine art paper with just 5 canvas prints, each signed and numbered by the artist and stamped with the publisher's seal to guarantee the edition size.