Tribute to a Lockheed ClassicTwin Pioneer
Back to: Aviation Art 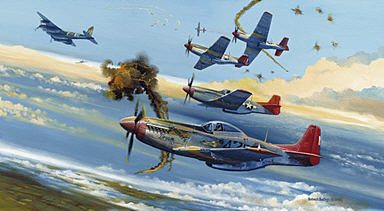 Tuskegee Trigger Time © Robert Bailey
Description
Tuskegee P-51 Mustangs of the 301 Fighter Squadron defend an RAF photo reconnaissance Mosquito above Germany during early 1945. Featured aircraft in this aviation art print by Robert Bailey is one of the most famous Mustangs of the Tuskegee: Creamer's Dream, flown by Captain Charles L. White.

A biography card comes with prints, showing photos and bios of the men who signed.
Free disc with editions except Studio Edition: A CD-ROM with images and text of the paintings as it develops on the easel, with shots of the artist in his studio and Tuskegee pilots signing the prints at a hotel in Orlando Florida. Comments on how the project came into being. Take a look behind the scenes! This disc fits into a 5″ mailing tube, along with the print.