Tribute to a Lockheed Classic 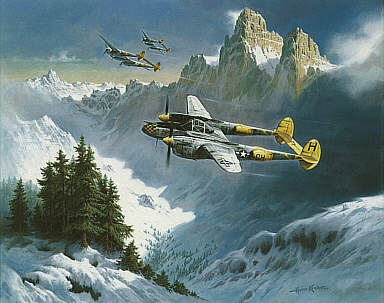 Tribute to a Lockheed Classic © Heinz Krebs
Description
A tribute to the design engineers, production line workers and test pilots who gave their utmost to provide America with the means the country needed to fight off one of the most menacing and deadly dangers she faced throughout her entire history. The aviation art print shows three Lockheed P-38 Lightning aircraft of the 97th FS, 82nd FG, 15th AF on a CAP mission over the Italian Alps in the winter of 1944/45.

A.W. “Tony” LeVier
Born February 14th, 1913 in Duluth, MN. Surely one of the greatest names of American test pilot history. Member of many prestigeous aviation societies, and winner of aviation awards too numerous to be listed here. Conducted extensive development test flying on the P-38.

C.P. “Nick” Nicholson
Born April 10th, 1917 in Ellington, CT. “Nick” Nicholson was engaged in test-flying and demonstrating Lockheed aircraft for 32 years. According to many, Nick flew the P-38 like no-one else. His “Lightning”-flying included production-, engineering-, delivery-, and demo flights.

Richard “Dick” Pulver
Born Sept. 23rd, 1912 in East Orange, NJ. Dick was hired by Lockheed in Burbank in July 1936, and became project engineer on the P-38. Later transferred to Lockheed-Georgia where, after filling various senior positions, he finally became President from 1961 to 1967.