Through the PassTimeless Beauty
Back to: Aviation Art

Thunder in the Sky 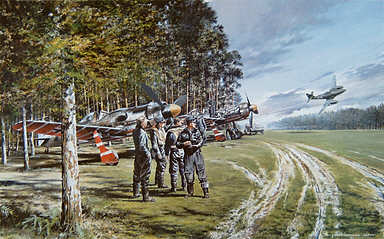 Thunder in the Sky © Geoff Nutkins
Price incl. VAT: 66 €
Currently not available
Ask a question about this product
Nutkins, Geoff

Thunder in the Sky © Geoff Nutkins
Description
In this stunning limited edition print, internationally acclaimed aviation artist Geoff Nutkins has captured a moment in which pilots of Leutnant Heinz Sachsenberg's Fw 190 equipped 'Sachsenberg Schwarm', freshly landed at Ainring airfield in Austria, gaze towards the skies as a lone jet fighter of Generalleutnant Adolf Galland's Jagdverband (JV) 44, part of a larger formation led by the legendary Heinz Bär, passes overhead en route to nearby Salzberg-Maxglan following the units evacuation of Munich-Riem during late April 1945.

"Thunder in the Sky" portraits the Me 262A-1a 'White 14' piloted by Uffz. Eduard Schallmoser. Schallmoser gained himself a reputation as the 'Jet Rammer' as result of his twice accidentially ramming enemy aircraft over southern Germany, surviving on both occasions. Lt. Heinz 'Heino' Sachsenberg, awarded the Knight's Cross upon his 101st victory over the Russian front with JG52, was later commander of JV 44's semi-autonomous airfield protection unit - the 'Wuerger Staffel' - whose uniquely painted long-nosed Fw 190 D-9s and D-11s patrolled the skies over Munich-Riem, home base to the unit. The Fw 190s were given a bold red and white underwing colour scheme as a means of identification to Me 262 pilots taking off or landing at Riem, times when the new jet fighter was its most vulnerable.

JV44 was the famous Me 262 fighter unit formed at Brandenburg-Briest in February 1945 by Gen.Lt. Adolf Galland following his dismissal as 'General der Jagdflieger' by Goering in reaction to the so-called 'Mutiny of the Kommodores'. It's distinguished complement was to include some of the Luftwaffe's finest fighter 'Experten' including Heinz Baer, Johannes Steinhoff, Guenther Luetzow, Gerhard Barkhorn, Willi Herget, Walter Krupinski and Erich Hohagen, earning the unit the title 'The Squadron of Experts'.