A Boeing F4B-2 Formation over Manhattan in the 1930s 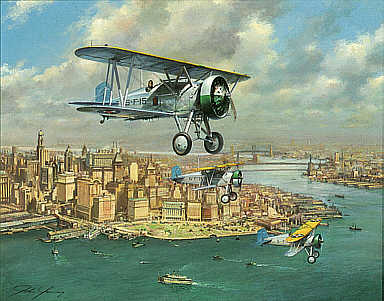 The Fleets In © John Young
Price incl. VAT: 132 €
Ask a question about this product
Young, John
Description
The aviation art print 'The Fleet's In' by John Young shows three Boeing F4B-2 Navy fighters cruising high above the city and harbor of New York's borough Manhattan, signaling the arrival of one of the most important ships of the day, an aircraft carrier. In the late 1920s aviation began to bloom within the U.S. Navy and the aircraft carrier gained recognition as the warship of the future. In 1930 the U.S. Navy carrier fleet consisted of three ships, all modified from other hulls rather than purposely designed as carriers. None-the-less they were effective warships an their complement of aircraft proved the worth of carrier-borne aircraft in test after test. The diminutive Boeing F-4B-2 fighter was one of the most successful designs of the period. With an operational appeal to the Army as well, the Boeing design evolved into the well known P-12 series. Robust, powerful, with good flying characteristics, later versions of the Boeing fighter served in first line carrier units until 1937. Carrier aviation has changed as dramatically as the Manhattan skyline but Naval Aviation has a foundation as solid as the city below.
Limited Edition
Published 1991
Overall Height ca.
56
cm
Image Height ca.
40.5
cm
Overall Width ca.
65
cm
Image Width ca.
50.5
cm