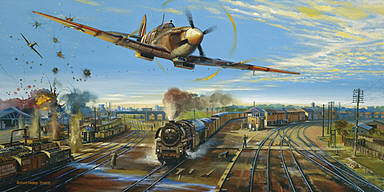 Smiths Defiants © Robert Bailey
Description
Lieutenant Ian Smith of 237 (Rhodesia) Squadron, RAF, attacks a rail yard in the italian Po Valley, July 1944. Lieutenant Smith went on to become the Prime Minister of Rhodesia,  Africa (now Zimbabwe), in April 1964. On November 11, 1965, he declared Rhodesia’s independence from Britain, the first commonwealth Prime Minister to do so. During this attack, Lt. Smith was shot down by flak and fought on with the Italian partisans, before returning to England. Hon. I.D. Smith, GCLM, ID.

Please note: this signature by such a high profile and controversial politician is especially collectable, and not just by aviation art enthusiasts! It is certain to gain in value for this factor alone. Also, this is a specially commissioned painting. The bulk of the prints are also a SPECIALLY COMMISSIONED BENEFIT RELEASE for ex-Rhodesian WWII veterans. These are 500 Limited Editions signed by Mr. Smith for private sale only, and not through the publisher.

The Signature
These prints were signed by Ian Smith in Capetown, South Africa, where he lives in retirement.
Edition(s) currently not available
Overall Height ca.
51
cm
Overall Width ca.
84
cm