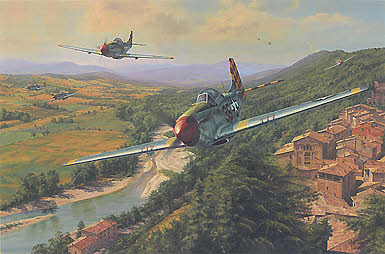 Roam at Will ® Anthony Saunders
Price incl. VAT: 126 €
Ask a question about this product
Saunders, Anthony

Roam at Will ® Anthony Saunders
Description
Returning to base after an arduous escort mission, Captain Art Fiedler leads a flight of P51 Mustangs from the 325th Fighter Group - the Checkertail Clan - through the Po Valley in northern Italy seeking out targets of opportunity amongst the retreating Axis forces, July 1944. When in December 1943 the 325th Fighter Group, the Checkertail Clan, had moved into south-eastern Italy they were soon escorting American bombers on long range missions deep into occupied Europe. In two years of air combat the Checkertails soon became one of the crack units in the Fifteenth Air Force, destroying a staggering 537 enemy aircraft in the air, and accounting for many more on the ground.

Limited Edition:
Signatories:
The edition is signed by the artist and authenticated by one of the foremost Aces in the 325th Fighter Group: