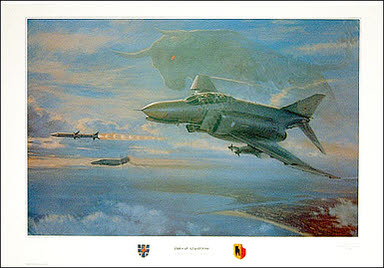 The Luftwaffe Fighter Bomber Wing 35 was renamed in 1995 to 73rd Fighter Wing, F-4F unit. The transfer of the F-4F Phantom was made in July 1997 as part of the decommissioning of the military base at Pferdsfeld. In September 1997 the joint operations of MiG-29 and F-4F Phantom in Laage began. In March 2002, the second fighter squadron and their weapon system F-4F Phantom was decommisioned.
The aviation art print Phinal Stampede by Ronald Wong is available as a Giclée-print (Print on Demand).