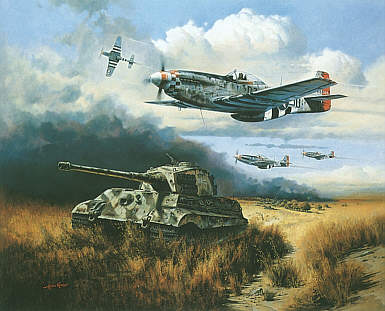 Description
Like many aviation art lovers Heinz Krebs is particularly attracted to the classical beauty of America's premier fighter - the incomparable P-51 "Mustang". Unlike the majority of aviation art works which show the P-51 in air-to-air combat, Heinz enjoys depicting the Mustang at low altitude, in close proximity to the ground, further highlighting the drama and action of the scenario. Heinz displays the same degree of artistic mastery in depicting the Third Reich's most feared battle tank, the lethal "Königstiger" ("King Tiger") - the terror of the allied land forces, in his painting entitled "Normandy Tiger Hunt". The tank which Heinz Krebs has depicted belonged to the 503rd Heavy Tank Battalion, one of only two German units equipped with King Tigers who where stationed in Normandy at the time of the allied invasion of Europe in June 1944. On the American side, it was mainly the Ninth U.S. Army Air Force who were tasked with flying close support missions for the allied drive into Continental Europe and towards Germany but units of the "Mighty Eighth" also attacked ground targets during the summer and fall of 1944. In "Normandy Tiger Hunt" a flight of P-51s of the 339th FG, under the command of their leading ace, Francis R. Gerard has started a series of strafing attacks on King Tigers.

Printed on heavy stock acid-free paper and issued with a certificate of authenticity.

Lt.Col. Alfred Rubbel
Combat experience from 1941 through 1945 in the northern and center sections of the Eastern Front. Decorations include: EK I and II, Tank Battle Badge (III). 79 combat operations, 57 enemy tanks destroyed. Wounded in combat.