Aviation Art Calendar 2023 Reach for the Sky
Me 163 B-1 KometMemories of Leavesden
Back to: Aviation Art 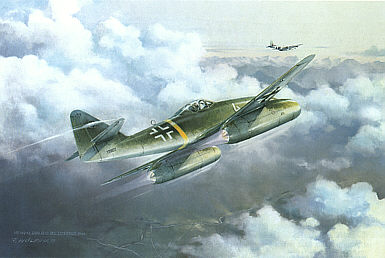 The aviation art print by Friedl Wuelfing shows the Me 262 'White 4' of the Operational Test Unit 262 from Lechfeld, Germany. It's pilot, Lieutenant 'Bubi' Alfred Schreiber, intercepts a De Havilland Mosquito PR Mk.XVI of 544th Squadron RAF near Munich and scores the first aerial victory of a jet airplane in aviation history on the 26th of July 1944. After receiving some hits, Flight Lieutenant A.E. Wall and his navigator A.S. Lobban barely escaped in a low-hanging cloud layer. As a result of the damage, the aircraft was unable to return to their home base RAF Benson in Oxfordshire, England. The crew headed for the nearest Allied airfield in northern Italy. In the following emergency landing at Fermo, the machine was destroyed.