First successful Flight across the Atlantic from East to West 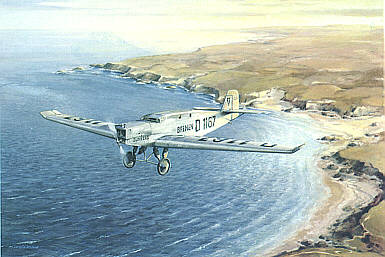 In this aviation art print Friedl Wuelfing shows the first successful flight across the Atlantic from east to west direction. After Lindbergh had flown over the Atlantic from New York to Paris in May 1927, a frantic race to conquer the ocean in the opposite direction, against the prevailing wind direction, began. Eleven months later, on 12th April 1928 at 5:38, the Junkers W33 "Bremen" started from Baldonnel in Ireland. On board the flight pioneers Hermann Koehl, James C. Fitzrnaurice and Ehrenfried Guenther Freiherr von Hünefeld. After an adventurous flight of more than 36 hours the 'Bremen' reached the American continent in Newfoundland.

For the first time a single-engine aircraft under difficult weather conditions, succeeded to establish an air link from east to west - between Europe and America. The enthusiasm, particularly in the United States, was as great as the previous year after Lindbergh's flight. The reception of the Ocean Conquerors in major cities showed a lively interest in this pioneering work. In New York they were surprised by an overwhelming ticker-tape parade and they were decorated with the highest award that America has to be give to pilots by the President of the United States. Not until 19th June 1928, they returned to Germany with the steamer "Columbus" and received a rapturous applause in the Bremen Town Hall and on the marketplace.