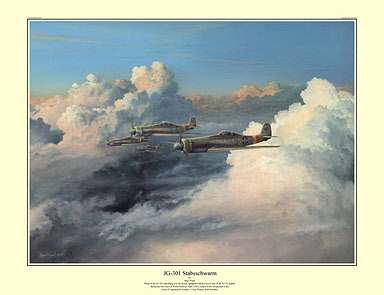 JG 301 Stabsschwarm © Ingo Vogel
Description
The aviation art print 'JG-301 Stabsschwarm' by Ingo Vogel depicts four Ta-152s of the Stabsschwarm JG-301 during a sortie over Germany in April 1945. In the foreground the Ta-152 'Green 9' with the works number 150168 last flown by Willi Reschke is seen.

At the end of 1944, the German Luftwaffe faced a huge supremacy of allied hunters, which in some cases exceeded the flight performance of the Me-109 and FW-190. The German aviation industry undertook great efforts to regain air supremacy with the Luftwaffe over Germany with new, superior fighter aircraft.
Focke Wulf, under chief engineer Kurt Tank, materialized the high altitude fighter Ta-152, which emerged from the FW-190 series. With a top speed of 750 km/h, it was the fastest piston-driven fighter aircraft of the Second World War and thus faster than the latest models of the Allies. The climb performance and agility were excellent and the pilots who flew the Ta-152 in combat were glad to have this fighter available. However, the heavy bombings of the Allies prevented the production of large numbers of the Ta-152.
In May 1945, the last Ta-152 were assigned to the newly formed staff swarm of the Jagdgeschwader 301, which was staffed with experienced aircraft pilots. Among them was Oberfeldwebel Willi Reschke, who had already been flying against the powerful bomber organizations and their companions with the Jagdgeschwader 302. With the Ta-152, Willi Reschke was able to score several more aerial victories. He himself said: "Without the excellent flight performance of the Ta-152, my chances to survive would have been inferior towards the end of the war." He was awarded the Iron Cross in April 1945. Each art print is individually signed by Oberfeldwebel Willi Reschke.
Edition
Image size including the colored border ca. 74 cm x 53 cm
Overall Height ca.
63
cm
Image Height ca.
53
cm
Overall Width ca.
84
cm
Image Width ca.
74
cm