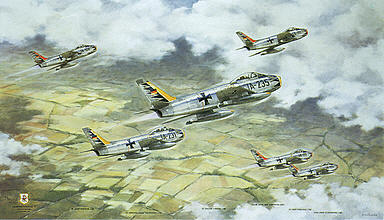 In June 1959, the Jagdgeschwader 71 of the Luftwaffe was officially formed in Ahlhorn by the Chief of Staff of the Luftwaffe Lieutenant-General Kammhuber. The wing commander was the still young Major Erich Hartmann, credited with a total score of 352 aerial victories during the Second World War, making him the most successful fighter pilot in the annals of aerial warfare. The wing's aircraft were Canadair CL-13B "Sabre" Mk.6, built in Canada. This type is an advanced version of the North American F-86, which was used successfully by the U.S. in the Korean War. On 21st April 1961, the 43rd anniversary of the death of Rittmeister Manfred von Richthofen, the legendary fighter ace of the Great War, Federal President Luebke awarded the prestigious honorary title "RICHTHOFEN" to the fighter wing.

Friedl Wuelfing's aviation art print shows six Sabres from the 1st and 2nd squadron on a training mission over Northern Germany, led by Wing Commander Erich Hartmann in his "JA-111". In the first few years after formation of the unit, many NCOs were still flying in the Jagdgeschwader. The well known Black Tulip painted on the air intake and on the fin of the aircraft was inaugurated by the unit's Wing Commander. This painted pattern had already been a feature of the Messerschmitt Bf 109 of his 9th squadron of Jagdgeschwader 52 over Russia. The Sabres of the 1st squadron also had additional red markings and those of the 2nd squadron yellow markings in combination with the Tulip pattern. The Mk.6 Sabre was flown by the unit until April 1963 and was then replaced by the Lockheed F-104G "Starfighter" along with the simultanious relocation of the fighter wing to Wittmund air base.

Pilot's names of the aircraft shown are imprinted in the bottom of the image.