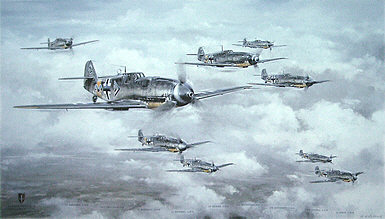 The aviation art print shows Me-109 of III. / JG 52 in July 1943. The Jagdgeschwader 52 is the most successful fighter unit in the history of aerial warfare. In nearly five years of service, at first in France and later in  the east, this fighter unit scored no less than 11,000 victories. Among others, its pilots were Johannes Steinhoff, Gerhard Barkhorn, Guenther Rall, Walter Krupinski, Fritz Obleser, Dietrich Hrabak and the legendary Erich Hartmann, who scored 352 aerial victories between 1943 and 1945. At the same time these are the names of a generation of World War II soldiers, who later, beginning in 1955, led the build-up of the air forces of the Bundeswehr. The 3rd. Group of the squadron, shown in Friedl Wuelfing's painting, was established in the spring of 1940 and first deployed at the British Channel coast in the west. But already in autumn of that year the group was relocated to Bucharest Pipera, to secure the oil wells and oil production in Romania. With the operation "Barbarossa" in June 1941, the invasion of Russia, the III. Group along with the wing staff and the Group I was relocated to the east, to be followed later by the entire wing. From then on, the III./ JG 52 operated mainly in the southern sector of the at times up to 2000 km wide front and fought until the end of the war in the east. Since commissioning of the wing, the Luftwaffe unit was the only one to fly exclusively the Bf 109.

On this art print the names of the pilots of the aircraft shown are imprinted in the bottom image area. Below the image the above text is printed in german language.