Aviation Art Calendar 2023 Reach for the Sky
HorridoHunters at Dawn
Back to: Aviation Art 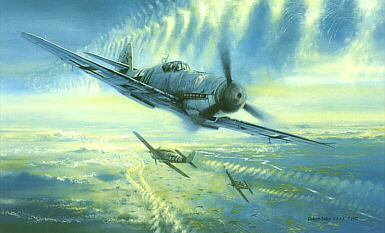 Horrido © Robert Bailey
Description
May 28, 1944 - On this day, American bombers concentrated their attacks on German oil targets. A record force of 1282 heavy bombers was dispatched, accompanied by 1200 escort fighters, and mounted strikes on a variety of targets. American strategy called for the leading bomb wings to hit other important targets in the vicinity of the oil facilities, as a ruse. The plan worked. Thirteen combat wings of American bombers suffered no losses at all to enemy aircraft.

The Luftwaffe did, however, have 300 fighters waiting for the leading wings over Magdeburg, and these Fortresses were hit hard. One of the German pilots was Feldwebel Horst Petzschler of 2/JG­3, flying at high altitude with Feldwebel Oscar Boesch. Homing in on the American aircraft, Petzschler managed to shoot down a P­-51 at approximately 12:20 PM. Very recent investigation has revealed that this was most likely the aircraft of Captain Woodward (Woody) Anderson of 486 Fighter Squadron, 352nd Fighter Group. In all, 40 American aircraft were lost during the day’s raids.

Petzschler’s Messerschmitt Bf­109G 6­AS was also damaged during the fight and he had to bale out of his aircraft during this engagement. The Leica gun camera in the left wingtip was later salvaged from the wreck. The rest of the aircraft was destroyed on impact with the ground. Petzschler consequently had to wait some time before his P­51 could be confirmed.

"Horrido!" is a graphic portrayal of this epic battle, placing Petzschler and Boesch above the bomber stream, with the latter turning and diving for the initial attack. Petzschler has seen the P­-51s, and is banking to engage. His aircraft was notable for the light camouflage paint it wore for the high altitude role it served. Below him, Feldwebel Oscar Boesch dives toward the bomber stream. Coincidentally, both of these pilots flew the same numbered aircraft this day: Black 14.

All editions are individually signed by Horst Petzschler, Oscar Boesch and the Artist.