Aviation Art Calendar 2023 Reach for the Sky
Heinkel He 177-A3High in the Sunlit Silence
Back to: Aviation Art 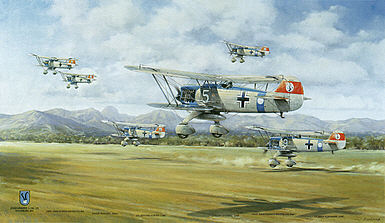 Heinkel He 51-B1 © Friedl Wuelfing
Description

As late as the year 1932, competent Reichswehr authorities still wanted a biplane design for single-seat fighters. The He-51 developed by Ernst Heinkel Aircraft Factory was a typical product of the time and the Heinkel became the standard Luftwaffe fighter for several years, alongside the Arado Ar 68. Its powerfull V12 water-cooled engine with a performance of 750 HP gave it a top speed of 330 km/h. The first aircraft from the series production arrived at the flying units in spring 1935. In April 1937, the reorganized Jagdgruppe I./JG 135 in Bad Aibling received its Heinkel single-seat fighters.

Friedl Wuelfing's aviation art print shows six of the group's He 51s during take-off from Aibling airfield. At the top, Group Commander Major Max Ibel, next to him his adjutant Flight Lieutenant Hans Schmoller-Haldy and four biplanes from the 3rd squadron, headed by squadron commander Flight Lieutenant Hans Heinrich Brustellin. The first and the second squadron were commanded by Flight Lieutenant Hannes Trautloft and Flight Lieutenant Wolfgang Schellmann - names well known to anyone familiar with the history of aerial warfare during the Second World War. Among the squadron officers too, we come across names that were to rise to high ranks in the course of the War: Second Lieutenant Eduard Neumann, Second Lieutenant Gerhard Schoepfel, Second Lieutenant Dietrich Hrabak, to name just a few. With their engine cowlings painted in 'Bavarian blue', the fighter groups' He 51s were a familiar sight in the skies over Upper Bavaria. Shown in the background of the painting is Bad Aibling's home mountain, the Wendelstein.

However, the aircraft soon became obsolete, because of the emergence of a whole series of very modern fighter types. In the Spanish Civil War, the inferiority of the biplanes already became apparent in spite of initial successes. A little later, the new Messerschmitt Bf 109 monoplane fighter increasingly ousted the He 51 into a close support and ground attack role and finally was used solely as a training and instruction airplane for future fighter pilots.

50 prints of the Edition are hand-signed by the Artist and two veteran pilots of I./JG 135, Gerhard Schoepfel and Guenther Scholz.