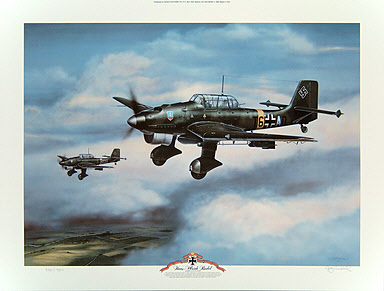 Hans-Ulrich Rudel Junkers Ju 87 B-2 Stuka © Jerry Crandall
Description
The aviation art print 'Hans-Ulrich Rudel' by Jerry Crandall depicts the classic Junkers Ju 87 B-2 Stuka in all of its ugliness, which was made famous by Rudel. It is incredible what he accomplished with an aircraft that was outdated and vulnerable in the Western Theatre. The markings depict late 1941 when Rudel flew with the Staff of III./SG 2. Artist Jerry Crandall personally interviewed Valerian Dill, one of Rudel's instructors for details about the aircraft and its pilots, who also furnished valuable original photos. Hans-Ulrich Rudel joined the Luftwaffe in 1936, eventually becoming the most highly decorated pilot in history being awarded the only golden Knights cross with Oakleaves, Swords and Diamonds. In addition he was the first officer to fly 1000 missions, eventually recording a total of 2530 sorties, destroyed one battleship, one cruiser, one destroyer, trains, anti-aircraft guns, landing craft, about 800 vehicles and over 500 soviet tanks.