Aviation Art Calendar 2023 Reach for the Sky
Freie JagdFury of Assault
Back to: Aviation Art

Fulcrums over the Baltic 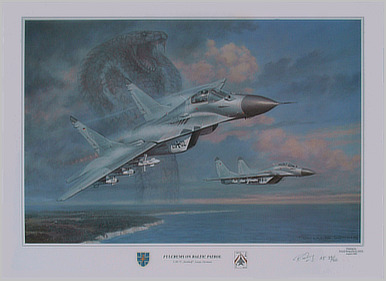 Acquired from the former NVA MiG-29 squadron after the German reunification in 1990, the aircraft were firstly used in testing the MiG-29 and in fall of 1994 were assigned to the 73rd Fighter Wing at Laage, and integrated into NATO's air defense structure. From autumn 2003, the MiGs were gradually delivered to the Polish Air Force. The aviation art print Fulcrums over the Baltic by artist Ronald Wong shows two MiG-29A of JG73.