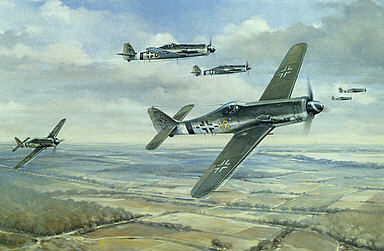 The fine aviation art print by Friedl Wuelfing shows six Focke-Wulf Fw 190D fighters shortly after their take-off from Suelte airfield near Schwerin, Germany. In the background you can see Lake Schwerin, located north of the airfield. In the center of the painting, Commodore Major Franz Goetz flies the the Fw 190D-13 'Yellow 10' - which now resides in the Museum of Flight, Seattle, WA, United States - followed by his staff adjutant Dietwin Pape in the 'Black 14'. The four Fw 190Ds in the upper right belong to the 1st and 2nd Squadron of the Fighter Wing 26 'Schlageter'. The long-nosed Dora was the best piston-engine fighter of WWII and perhaps the most successful of all wartime fighters of the Luftwaffe.