Aviation Art Calendar 2023 Reach for the Sky
Eye of the SunF4U Corsair
Back to: Aviation Art

F-104G Starfighter of the Luftwaffe 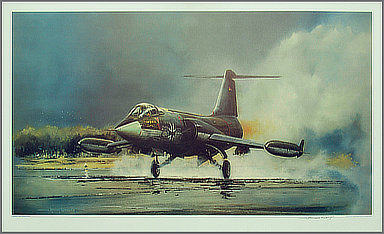 F-104G Starfighter © Michael Rondot
Description
The legendary Lockheed F-104G ‘Starfighter’ has gained a fearsome reputation unparalleled by any post-war combat aircraft. Since its introduction to front-line service with the Federal German Luftwaffe in 1961 it has been surrounded by controversy and scandal. In the early 1960’s, when the loss rate was one about every ten days, the aircraft was variously described as ‘The Widow Maker’ and ‘The Flying Coffin’. In fact, the Starfighter’s long term safety record compares favourably with other advanced high-performance aircraft, and the F-104G overcame its early troubles to become one of the finest Interceptor, Strike/Attack and Recce aircraft of its generation.

Originally designed as a pure high-level Interceptor by Clarence ‘Kelly’ Johnson at the famous Lockheed ‘Skunk Works’, the F-104G Starfighter was adapted to fulfil every front-line role, and was operated by fifteen different Air Forces. At the height of its career with the Luftwaffe the Starfighter was flown by five Fighter Bomber, two Interceptor, two Reconnaissance and two Training Wings.

In this powerful portrayal the F-104G Starfighter is shown taking off in full afterburner on a typically dark and forbidding day in Germany. The artist, MICHAEL RONDOT, a specialist in military aircraft subjects, has captured the classic lines of ‘Kelly’ Johnson's beautiful design. The print was published to mark the 25th Anniversary (1961 - 1986) and twilight of service for this remarkable aircraft in a limited edition of signed and numbered fine-art copies.
Limited Edition
Overall Height ca.
50
cm
Overall Width ca.
70
cm