Escort FuryEye of the Sun
Back to: Aviation Art 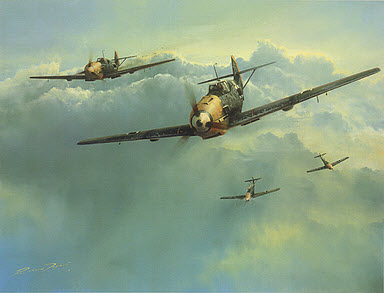 Hauptmann Wolfgang Ewald, Gruppenkommandeur of 1./JG 52, leads a Schwarm of Bf-109s back to their base near Calais after another hectic encounter with pilots of RAF Fighter Command during the Battle of Britain, September 1940. Signed by the artist, Erich Rudorffer and Hans-Ekkehard Bob.

The 'Battle of Britain Luftwaffe Proofs' are issued with a unique and substantial original pencil drawing which is personally autographed by legendary Battle of Britain Ace General Gunther Rall. Each is matted to include the original signatures of a further three outstanding Aces that flew in the Battle, including the second highest scoring Ace of all time – Gerhard Barkhorn, amassing a staggering 1034 victories between just six of them! Signatures are: