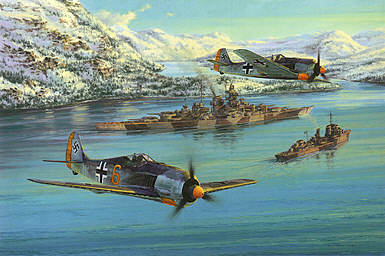 Eismeer Patrol © Anthony Saunders
Description
On the morning of March 11th 1943, Fw190s from IV./JG5 fly escort to the mighty battleship Tirpitz and a screening fleet of destroyers and torpedo boats as they begin a voyage north to Bogen Bay during Operation Rostock. Designed to evade the increasingly frequent British bombing raids, the Tirpitz joined an impressive German naval battle fleet gathering near Narvik. In this fleet, it posed a grave threat to Arctic convoys before its destruction on November 12th, 1944.