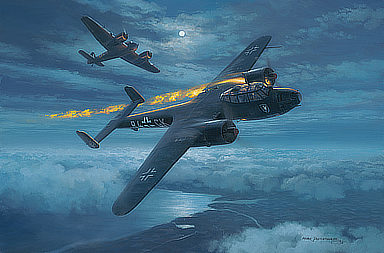 East Coast Intruder © Mark Postlethwaite
Description
‘East Coast Intruder’ by aviation artist Mark Postlethwaite depicts the Dornier Do17Z-10 R4+GK of 2/NJG2, piloted by Fw Wilhelm Lettenmeier, in the early hours of 8th May 1941. Whilst on a night intruder mission against RAF bomber bases, the aircraft was intercepted by a 25 Squadron Beaufighter over ‘The Wash’, a largely rectangular bay and estuary on the East coast of England. The crew of Beaufighter T4634 spotted the Do17 against the brightly moonlit cloud below and after a short combat saw the Dornier spiral down in flames to crash near Boston.

This is print number 12 in the artist's RLM Collection.
Limited Edition