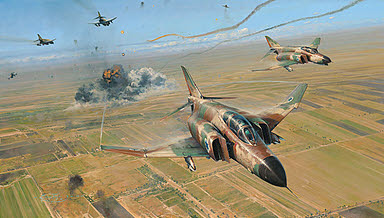 Description
Robert Taylor’s powerful and dramatic aviation art print 'Double Strike' depicts an action during the largest jet-to-jet battle in history - the Yom Kippur War. One such strike that took place on 14 October 1973, half way through the war, when Israeli F-4 Phantom fighter-bombers made simultaneous strikes against the Egyptian air bases at Mansoura and Tanta north of Cairo.
Yom Kippur – the Day of Atonement – is the holiest day in the Hebrew calendar and in Israel is marked by a national holiday but on that day in 1973 the unexpected happened. At 14.00 hours on 6 October the coalition of Arab states led by Egypt and Syria launched a surprise attack on Israeli positions. Thousands of Egyptian troops swarmed across the Suez Canal into Israeli- held Sinai whilst in the north nearly 1,500 Syrian tanks backed by artillery thrust west towards Israel. Facing this sudden surprise attack on the Golan Heights were less than 200 Israeli tanks. In the air, too, Egyptian and Syrian air forces struck in a single, co-ordinated assault hitting the Israeli’s anti-aircraft defences and hoping to deliver a fatal blow.
Largely unprepared, Israel reeled however within hours it mobilised its fighting reserves and began a ferocious battle to stem the enemies advance. As Israeli tanks and infantry rushed to hold the front line and, in the north, push the enemy back, Israeli Air Force jets overhead fought a heroic battle to regain the initiative and control of the skies. It was grim work. Both Egyptian and Syrian forces were equipped with hundreds of Soviet-supplied SAM missiles but the tide of war was turning and a battered Israeli Air Force now went on the counter-offensive. And amongst their main targets were the heavily-defended Egyptian air bases that lay deep in the Nile delta.
After the first wave struck the elite Egyptian MiG-21 units at El Mansoura, the other Phantom squadrons attacked Tanta in waves, turning to dog-fighting immediately after dropping their ordnance. Tanta was also home to two squadrons of Libyan Mirage 5s and the furious air battle that ensued involved countless fighter aircraft. Despite bitter opposition, the successful IAF missions eliminated much of the effectiveness of the Egyptian Air Force and its Libyan allies.
Robert Taylor's publisher is honored to present one of its most ambitious projects which has brought together no less than TWENTY TWO Israeli Phantom Pilots and Navigators who have autographed this unique edition, including some of the foremost Phantom Aces of all time. Rarely have so many Phantom crews gathered together to sign a print edition and this powerful painting serves as a lasting tribute to all IAF Aircrew that flew the F-4 Phantom with such bravery and distinction during many conflicts to defend Israeli territory.
Editions:
The Signatories
Pilots:
Navigators:
* These copies have a small unique original pencil drawing (Remarque) inscribed on it by the Artist Robert Taylor.