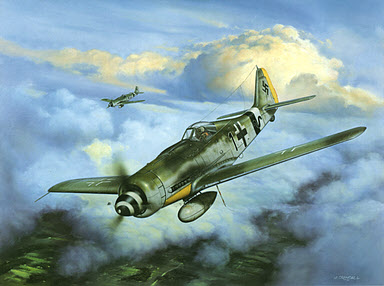 Dora 9 © Jerry Crandall
Description
The aviation art print ‘Dora 9 Green Hearts’ by Jerry Crandall depicts the Fw 190 D-9 “Black 1” W. Nr. 210003, Pilot Oblt. Hans Dortenmann of 14./JG 26 (IV. Gruppe), March 1945 near Varrelbusch, Germany. This aircraft was the third D-9 delivered having been originally tested and adjusted at Rechlin, then issued to Dortenmann. It survived the war; however, Dortenmann sadly blew up his trusty crate at war’s end. In addition, it is featured on the cover of GREEN HEARTS FIRST IN COMBAT WITH THE DORA 9, a Luftwaffe unit history by Axel Urbanke. Each print is co-autographed by Gerhard Kroll, who as Feldwebel flew D-9s with III./JG 54 as top cover for Kommando Nowotny’s Me 262s. After Nowotny’s death, Kroll was assigned to home defense flying with JG 26.