Doolittle's B-25 Mitchell after being launched from USS Hornet 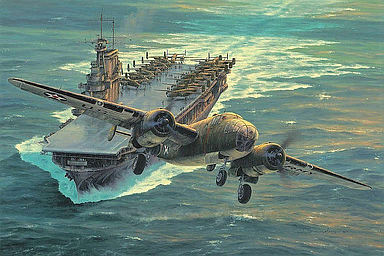 Destination Tokyo © Anthony Saunders
Description
The aviation art print 'Destination Tokyo' by Anthony Saunders portrays the dramatic moment that Lt Col Jimmy Doolittle lifts his B-25 off the pitching deck of the USS Hornet. Having timed his launch to perfection he climbs steeply away, ready to adjust his compass bearing for a direct course to Tokyo. On the sodden deck behind him the crews of the remaining 15 aircraft, whose engines are warmed up, ready and turning, will quickly follow their commanding officer into the murky sky.