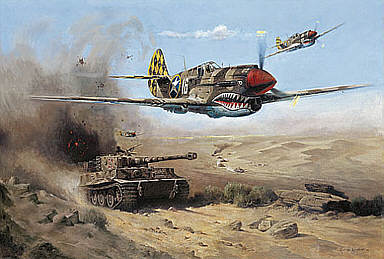 Description
'Desert Sharks' is a piece in a series of absolutely stunning African theatre aviation art prints by Heinz Krebs, who captures the typical mood and atmosphere of the North African theatre in World War II like no other, almost with the authority of an eyewitness. The carefully chosen scene for this painting’s drama to unfold are Curtiss P-40 fighter aircraft of the 325th FG, 12th AF, the dreaded 'Checkertail Clan', as they attack a German tank column in the African desert during the defeat of Field Marshal Erwin Rommel's 'Afrika Korps' in Tunisia in the early spring of 1943.

Printed on heavy stock acid-free paper and issued with a certificate of authenticity.