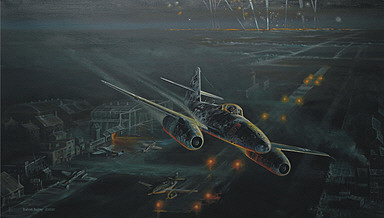 Dark Defenders © Robert Bailey
Description
In this aviation art print by Robert Bailey, Leutnant Joerg Czypionka takes off from his base at Burg (near Magdeburg) in Germany in early 1945, to defend the area from an incoming Lancaster raid. Lt. Czypionka is one of the very few Luftwaffe pilots who flew the revolutionary Messerschmitt 262 jet during night operations in WWII. This was the Kommando Welter 10/NJG­11 and Joerg flew "Red 6". Another 262 takes off while Lt. Czypionka climbs for height. Below, we see two night fighter Me­-110's warming up for night missions, with ground crew standing by. A Me-109 is parked after its day's work. Because a black-out was in effect, runway lights were lit for only a few minutes. For the same reason, a mechanic hastily closes a workshop door to prevent light from being seen by marauding Allied fighters.