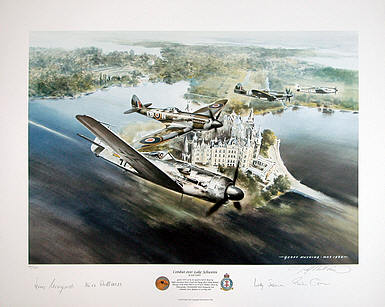 Combat over Lake Schwerin © Geoff-Nutkins
Description
A Commemorative Limited Edition by Geoff Nutkins
This aviation art print by Geoff Nutkins features Spitfire XIVs and Focke-Wulf Fw 190D-9s over Lake Schwerin with Schwerin Castle in the background in one of the last air battles of World War II. Each print signed by participating pilots Peter Cowell, Heinz Marquardt, Walter Jallands and Heinz Radlauer. The 1st May 1945 saw British forces under Field Marshal Montgomery continue their relentless drive across northern Germany from the Elbe towards Berlin. In the air, the Luftwaffe, despite overwhelming odds and virtually starved of fuel, continued its spasmodic but defiant defensive operations against the Allied Air Forces on the Western and Eastern fronts.

During the late morning, a formation of six "long-nosed" Fw 190D-9s of 15./JG 51 - an element of the famous Moelders Geschwader - under the command of 23-year-old Fahnenjunker-Oberfeldwebel Heinz Marquardt took off from their base at Parchim to escort a formation of ground-attack aircraft to Berlin. Having concluded their mission, the long-nosed "Doras" returned with the fighter-bombers to Schwerin, in what was intended to be the unit's last operation before surrendering to Allied forces. At exactly 13.00 hrs, as they commenced their approach to the airfield, the German formation was spotted by the six RAF Spitfire XIVs forming Kudos Red Section of 41 Squadron led by Flight Lieutenant Peter Cowell and detailed to conduct a "sweep" around the Schwerin Lake and neighbouring aerodrome.

Climbing to 6,000ft and into cloud cover, Cowell and his wingman, Flying Officer Walter Jallands, turned back over Lake Schwerin and observed "two long-nosed Fw 190s flying east at zero feet over the water."  Together, Cowell and Jallands chased the two German fighters across the lake with Cowell opening fire at 300 yards on the right hand Fw 190. The German fighters - separated now from the rest of their formation - broke away in opposite directions, Marquardt turned sharply to the right, whilst his wingman, Feldwebel Heinz Radlauer, banked left. With Cowell closing in to 50 yards, his guns registered hits on Marquardt's aircraft. The Focke-Wulf embarked on an almost vertical climb, streamed black smoke and flipped over. In Marquardt's cockpit, the impact of the Spitfire's cannon shells had caused debris from the Focke-Wulf to hit the German pilot's head and Marquardt fell forward smashing his nose on his gunsight. Miraculously, he was able to bale out and parachuted into the grounds of a nearby hospital, while his aircraft crashed close to the lake below. Moments later, Cowell attacked another Fw 190 orbiting to the north, whose pilot baled out, and the aircraft crashed towards the south-eastern edge of the lake, whilst Heinz Radlauer escaped at tree-top height towards Flensburg pursued by another Spitfire.

The war diary of IV./JG 51 recorded: "Against destiny we are all helpless... That was shown on 1st May when our Ofw. Marquardt - honoured and recognised by the whole Gruppe as being one of our finest fighter pilots - was shot down by a Spitfire over Schwerin during the last mission of the war."  Peter Cowell claimed two Fw 190s destroyed.