Spitfires and Messerschmitt Me-109 during the Battle of Britain 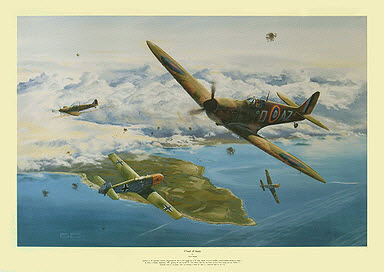 Clash of Aces © David Bryant
Description
The aviation art print 'Clash of Aces' by David Bryant depicts Spitfires of 234 Squadron confronting Messerschmitt Me-109s of JG2 during one of the many attacks on the naval facilities around Portland during the height of the Battle of Britain, September 1940. Ignoring the anti-aircraft fire, Pilot Officer Bob Doe and Major Helmut Wick charge past one another in a fearsome 'head on' encounter, each Ace seeking to defeat the other in a desperate fight for survival.