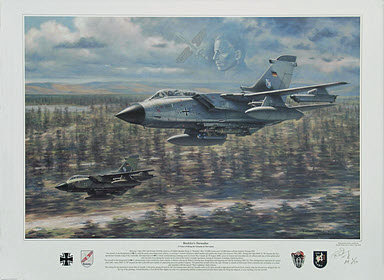 The aviation art print Boelcke's Tornados by Ronald Wong shows two Tornado IDS from Luftwaffe Fighter Bomber Wing 31 'Boelcke' flying low level in Labrador, Canada after take-off in Goose Bay. A favourite among all aircrew, the vast training areas allowed Tornado crews to fly their aircraft at high speed and lowest level, exactly what the aircraft was designed for. At the top of the painting, Oswald Boelcke, a First World War fighter ace who was a pioneering military aviation tactician and whose name the Wing has adopted, is seen watching over the aircraft.

Between 1 July 1983 and 30 June 2010 the aircrews of Fighter Bomber Wing 31 'Boelcke' flew 112.000 sorties and 176.000 hours with the Tornado IDS. The aircraft in the background (44+22), with the green camouflage paint scheme, is carrying 5 General Dynamics Mk82 bombs and typifies the wing's role between 1983-2001. During this time FBW 31 'B' became the first operational Tornado wing of the Luftwaffe. De depiction of 44+22, which crashed during a training sortie in Goose Bay, Canada on 30 August 2000, serves to honour and remember the six officers and one civilian glider pilot who lost their lives during the twenty-seven years of the wing's Tornado operations, losing six Tornados in training related accidents.

The aircraft in the foreground (44+31), pictured here in an overall grey paint scheme, is shown carrying the Rafael Litening laser designation and targeting pod and the Raytheon GBU-24. This configuration represents the period after 2001, when FBW 31 'B' became the first Luftwaffe unit capable of employing precision-guided weapons. This particular aircraft will be the only Tornado to remain at Nörvenich where it proudly sits on display as main gate guardian with the special 'Blue Lightning' paint scheme.
In June 2010, the Tornados have been permanently replaced by the Eurofighter, after being 27 years in service.