Aviation Art Calendar 2023 Reach for the Sky
Bismarck into BattleBlack Jet
Back to: Aviation Art 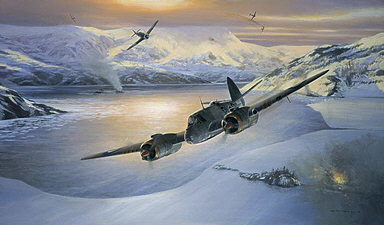 At 14:00 on the 9th February 1945, 31 Bristol Beaufighters of 445 (RAAF), 404 (RCAF) and 144 Squadron (RAF) took off for a strike against a small German Naval Force hidden in Fordefjord. By 19:00 that evening, 404 Squadron were coming to terms with the loss of six of their aircraft, 11 men dead one POW. In total, nine Bristol Beaufighters were lost that day along with one North American Mustang, the Germans lost 5 Focke Wulf 190s. Fourteen Allied aircrew and two German pilots were dead.

The painting by Mark Postlethwaite and these limited edition aviation art prints were produced to commemorate the 50th Anniversary of this momentous action, with the full co-operation of the Norwegian military authorities. It faithfully recreates the moment when Butler and Nichol, on their first operational sortie were attacked and hit by an Focke Wulf 190 over Fordefjord. They limped back to base and belly landed at Dallachy.

The original painting now hangs in Herdla Museum, from where the Focke Wulf 190s of JG5 took off to intercept the raid.