Aviation Art Calendar 2023 Reach for the Sky
Birth of a Fighter LegendBlack Friday
Back to: Aviation Art

Battleship Bismarck leaves Grimstadfjord in May 1941 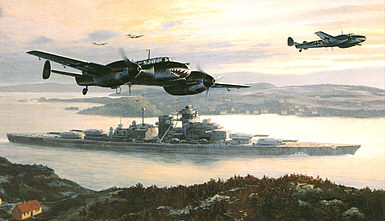 This combination of aviation and naval art by Mark Postlethwaite depicts the majestic Bismarck leaving the Grimstadfjord in Norway. The Battleship is escorted by Messerschmitt Bf110s of II/ZG 76 based at nearby Herdla, their 'shark-mouth' noses contrasting sharply with their grey mottled camouflage. The time is 19.45 hours on 21st May 1941 and the scene is one of tranqquillity before the battle commences. During the next seven days, "the most powerful battleship ...in the world", as Churchill described the Bismarck, will take on the combined might of British air and naval forces, sinking HMS Hood and finally coming to rest in the waters of the North Atlantic with the loss of almost 2000 lives and only 115 survivors.