Aviation Art Calendar Reach for the Sky 2021Bear Trap
Back to: Aviation Art

Battle of the Brenner

B-25 Mitchells over the Brenner Pass 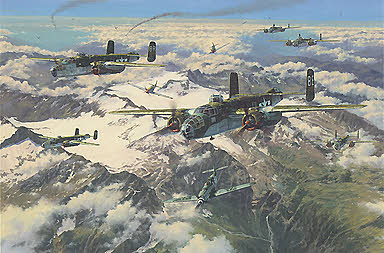 Battle of the Brenner © Anthony Saunders
Description
The last remaining units of the fascist Italian Air Force attempt to engage B25s from the 340th Bomb Group who have successfully destroyed a vital enemy rail bridge in the strategic Brenner Pass, northern Italy, 10 April 1945. The enemy Me109s are completely routed by escorting P51 Mustangs of the 325th Fighter Group who are quickly on the scene.There was only one way the Germans were going to re-supply their beleaguered army in Italy against the relentless assault of the Allies pushing northwards – and that was through the Brenner Pass in the Alps. The Allies knew that if they could destroy this strategic labyrinth of heavily defended road and rail bridges, the enemy would either be forced to surrender, or perish. And the task of destroying these bridges fell to men of the US Twelfth and Fifteenth Air Forces who must fly their heavily-laden bombers dangerously close to the rugged Alpine peaks, and endure a pounding from the anti-aircraft guns lining the narrow pass below. Not to mention any roving enemy fighters, or the turbulent weather over the mountains.