AlarmstartAmbush!
Back to: Aviation Art 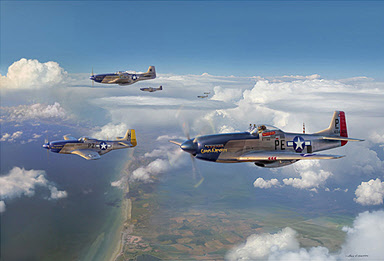 Almost Home © Jim Laurier
Description
The aviation art print 'Almost Home' by Jim Laurier is a tribute to the 352nd Fighter Group, which depicts a 'combat out' or loose formation of 352nd P-51D Mustangs crossing the coast of France over the English Channel on their way home to Bodney, England. They were known as 'The Blue Nosed Bastards of Bodney'. To the Luftwaffe, they were probably simply known as 'trouble'. The 352d Fighter Group was one of the most highly decorated USAAF Fighter Groups in World War II, producing many leading aces of the war. It was composed of the 328th, 486th and 487th Fighter Squadron. Once deployed to the European Theater of Operations, the group was eventually headquartered in Bodney, England before being forward deployed to Belgium. It performed a variety of missions for the Eighth Air Force, but predominantly served as bomber escort. During WWII the 352nd flew 420 missions, 59,387 operational combat hours, destroyed 776 enemy aircraft and had 29 aerial aces.

Among the group of Mustangs shown are Limited Edition