P-51D Mustangs over the Rhine valley 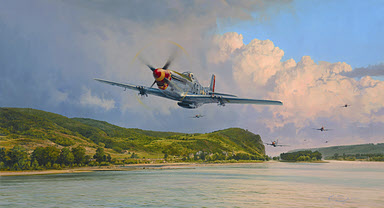 Air Superiority © Robert Taylor
Price incl. VAT: 238 €
Ask a question about this product
Taylor, Robert
Description
The aviation art print by Robert Taylor is the first in a collection of limited edition aviation art prints commemorating the 60th Anniversary of the conclusion of World War II. In April 1945, with the War virtually over, P-51 Mustangs of the 357th Fighter Group sweep unopposed at low level through the beautiful Rhine valley. This is the first release in a pair of prints paying tribute the USAAF in Europe 1942 - 1945. The edition is personally signed by up to TWELVE Fighter Aces and pilots all of whom flew in Europe with the 357th Fighter Group.