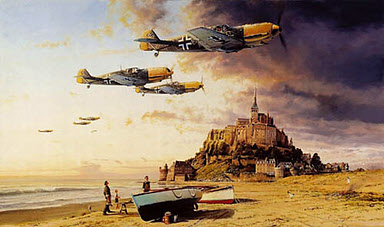 During the spring of 1941 almost all of the great Luftwaffe fighter leaders duelled across the English Channel on a daily basis with RAF Fighter Command. But the Abbey of Mont St Michel has seen it all before: built by the Normans on a solid rock of granite rising 250 feet out of the sea, this ancient monastery has witnessed conflict over almost a thousand years. It now plays backdrop to Robert Taylor’s iconic painting.

Using the latest imaging and printing technology, these high definition Giclée Studio Proofs now allow to replicate the sophisticated artistry of this Robert Taylor Masterwork. Robert Taylor had this to say about the result: “These Giclée proofs are so impressive, they are as close to my original painting in colour and texture as it is possible to achieve in reproduced format.” Every canvas is signed by Robert Taylor, stamped on the back, hand-numbered and issued with a Certificate of Authenticity.