Above and BeyondAces on the Western Front - Giclée Studio Proof
Back to: Aviation Art 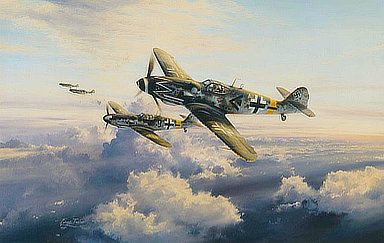 Ace of Aces © Robert Tailor
Description
The ‘Ace of Aces’ Giclée on canvas edition from Robert Taylor's beautifully proportioned painting depicts Erich Hartmann leading a Schwarm of Messerschmitt 109G's as they half-roll into attack, high over the Russian Front. Erich Hartmann became the world's top-scoring fighter pilot, achieving 352 aerial victories during World War II, a feat that is never likely to be surpassed. Flying the legendary Messerschmitt Me 109, Hartmann was invincible in the air, achieving his phenomenal success during no fewer than 1400 Combat Missions. His tactics were simple: "Get in so close to your Opponent that you cannot miss." This required supreme courage and flying skill but was not without its hazards: of the 16 times he was brought down, 8 of these were caused by flying debris from the aircraft he had destroyed.

Known äs the ‘blonde knight’, Erich Hartmann was a young fighter pilot with enormous courage and leadership qualities. As Group Commander of the famous JG-52 Fighter Wing he took pains to personally train the young pilots joining his Wing, and took great pride in having never lost a Wingman throughout his combat career. Awarded Germany's highest military award, the Knight's Cross with Oak Leaves, Swords and Diamonds, Erich Hartmann was a legend amongst fighter pilots.