The Rain Master - Schumacher at Spa 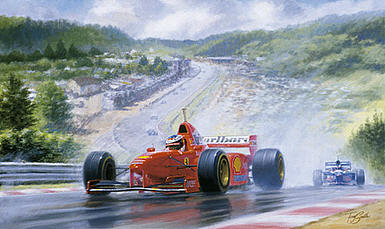 The Rain Master © Tony Smith
Price incl. VAT: 134 €
Ask a question about this product
Smith, Tony
Description
On 24th August 1997, the streaming wet Belgian Grand Prix at Spa proved to us yet again the sheer genius of Michael Schumacher at the wheel of a Formula 1 car. Michael started from third place on the grid. Unusually the first three laps were run behind the safety car, but on lap four the raceing started. In one lap the twice World Champion overtook both Jean Alesi and Jacques Villeneuve in the most convincing style. He then produced a lead so great that he was never headed again - not even during his two pit stops. Sheer genius.