Aviation Art Calendar 2023 Reach for the Sky
The Italian JobThe Last Victory
Back to: Automobile Art

The Last of the Titans 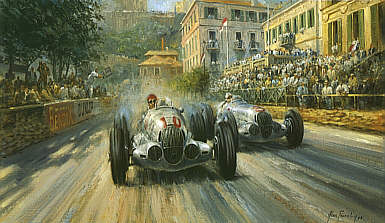 The Last of the Titans © Alan Fearnley
Price incl. VAT: 141 €
Ask a question about this product
Fearnley, Alan

The Last of the Titans © Alan Fearnley
Description
This Formula-1 art print by Alan Fearnley depicts Manfred von Brauchitsch and Rudolf Caracciola driving the legendary Mercedes-Benz W125 at the 1937 Monaco Grand Prix. Von Brauchitsch defied orders from team manager Neubauer, racing and eventually beating his team-mate Rudolf Caracciola in a closely fought race over 100 laps of the circuit. Mercedes finished the race 1-2-3. This was one of only three Grand Prix wins for Manfred Von Brauchitsch, who died on the 5th February 2003 at the age of 97.