Aviation Art Calendar 2023 Reach for the Sky
Shark Nose at SpaSilver Star
Back to: Automobile Art

Victory of the Sauber-Mercedes Team in Le Mans 1989 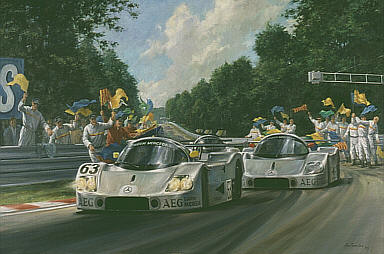 Silver Arrows © Alan Fearnley
Description
On June 10th and 11th 1989, Le Mans heralded the triumphant return for Mercedes. Having claimed the lead with over 8 hours remaining, number 63 held it all the way to its historic victory. Headlights ablaze, the pride of Team Sauber Mercedes finished the race masterfully. Mercedes had only returned to Motorsport little more than a year before. Their triumph was particularly sensational when taking into account that this, the 57th edition of the classic race, was the most strongly contested field in Le Mans' history. Le Mans is not only the most famous motor race in the world, but also the most arduous and the most fiercely contested - and therefore the most difficult to win. Victory at Le Mans can be achieved only by those able to sustain the very highest standards of engineering, team management and driving. The winning car covered almost 3,272 miles at an average speed of over 136 mph including 31 pitstops, and remaining at rest for a total of only 53 minutes. Car number 63 was driven by Jochen Mass, Manuel Reuter and Stanley Dickens.

The winning car offered its drivers a first win at Le Mans. Haying been built by Peter Sauber, and researched aerodynamically at Untertuerkheim it is capable of a maximum speed of 250 mph - which means that it is the fastest car in the world. What better reason for its name - The Silver Arrow?

This limited edition print is taken from an original oil painting by well-known motoring racing artist Alan Fearnley, and is a fitting
commemoration of such a fine win by the Sauber-Mercedes team.