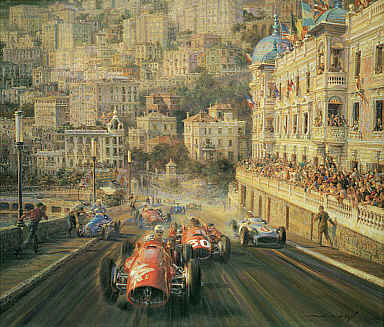 This Grand Prix Motorsport art print by Alfredo De la Maria depicts a szene from the Grand Prix d'Europe, Monaco, 22nd May 1955. Maurice Trintignant in the winning Ferrari 625 hotly pursued by the Lancia D50 of Castellotti and the Maserati 250F of Mieres climbing the Montee du Bau Rivage. All are being lapped by Stirling Moss in the Mercedes W196, who ultimately was to drop out with internal oil problems after having led for some 20 laps.