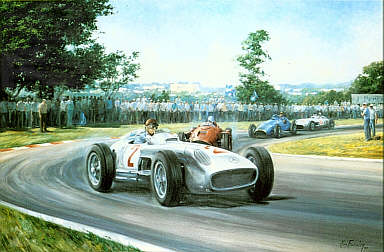 Fangio © Alan Fearnley
Description
This F1 motorsport art print by Alan Fearnley shows Juan Manuel Fangio on his way to victory followed by Ascari, Gonzales and Moss in the 1955 Argentine Grand Prix. Fangio drove a Mercedes W196 at an average speed of 77.51 mph and obtained the fastest lap of 80.81 mph. The race was held at a temperature of 36 degrees Celsius. Supplied with a photograph of Fangio signing this print.